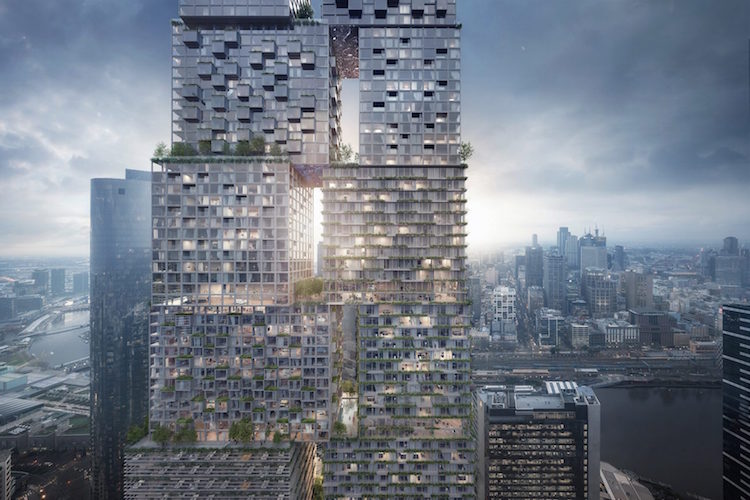 Less of a symposium and more a pre-marketing marketing campaign by a developer. That said, it was astonishing to be able to watch six of the top international architectural firms battle it out and present their ideas for this particular site. The building is a heavy mixed use $2B tower at a Site on the corner of City Road & Southbank Boulevard in Southbank Melbourne (currently a BMW showroom). This boulevard has some major adjustments underway as the Arts Precinct expands southwards and now east to this site and beyond to the Yarra River. I don’t think anyone mentioned the notion this is likely to be Australia’s tallest structure but everyone was aware that City Road is a basket case in need of some major love. The idea this was a ‘future cities’ talk is not far off as this building will house a future city with 250,000 square feet of space.

The developer is Beulah International, a very young Malaysian couple with fantastic intentions. They have a few sites under their belt already and they recently bought this BMW site with plans to build something major. A very limited competition was help over the past three months with architects that included a big name international and a well respected local partner. Caroline Bos introduced UN Studio + Cox Architecture and their Green Spine buildings. Asia-pacific partner David Gianotten spoke for OMA + Conrad Gargett (OMA’s Rem Koolhaas is the 2000 Prtizker Prize winner). Wolf D Prix was the rockstar of the session speaking for Coop Himmelb(L)AU + architectus to present their ‘propellor head’ building. Winy Maas spoke at a million miles per hour for MVRDV + Woods Baggot for their Stack building. The super smooth partner Brian Yang spoke for BIG + Fender Katsalidis and their Lanescraper building and finally MAD & Elenberg Fraser for the wild Urban Tree with a sky cloud observation gardens and deck up in the gods. All the schemes had a very mixed set of uses and they didn’t appear to match a particular set brief other then BMW being front and centre again (an odd spot for a car showroom when you are keen to close roads).

The whole presentation was extraordinary in every way, arrival to the symposium was via a black curtained corridor with strobing light show into a 3D video promo presentation including immersive lasers and visual effects a plenty. The main auditorium happened to be in the Southbank Shakers religious hall, super modern and setup with 10ft high wrap around 3D projection screens. The screens were impressive but they unfortunately lacked clarity for all the architects presentations, it would be great to see them again as PDF’s on our own screen. I understood this presentation was a shorter version of the private presentations each architect had given to the developer and selection panel the previous day. Regardless, each architect was introduced like a rockstar, Wolf went even further and played some Rolling Stones. He quipped “What is the difference between a rockstar and a starchitect? The rockstar gets paid”. Brian Yang reiterated this comment but then he thanked the room and developer for treating him like a rockstar, these words actually brought it back to earth a little, it made me realise this is not normal and even these guys were pretty impressed with the whole affair.

After the last presentation the lights went up and we were directed back into the anteroom where the black curtains had been dropped displaying all the architect’s work on 10x A1 boards and associated models (al a uni pin-up). MVRDV’s models were the most impressive and included plenty of them but the OMA model really sparkled with gold mesh inlay. OMA also presented a booklet of their proposal that was equally pretty. UNStudio was the only one missing from the physical display. I am not sure what the architects thought of the whole event with the majority of the room filled with rubberneck architects, lots of students, all sorts of consultants including graphic designers, property marketing agents, traffic & planning consultants, services engineers, project managers and land surveyors. It was a big networking event and Beulah were at the centre of it all.

It was a busy week in both Sydney and Melbourne with all sort of events. Thursday saw Naomi Milgrom’s Future Cities forum in Melbourne with Carme Pinos (next MPavilion designer), SANAA (Pritzker Prize winner) & Saskia Sassen amongst others. Followed up on Friday we had the above mentioned Future Cities Symposium in Melbourne with SouthBank by Beulah while Sydney also had a Design Speaks Housing Futures forum on the same day again with Saskia Sassen appearing & Go Hasegawa plus plenty of other great local talent. Inspiring times. The next serious event is the Design Speaks Sydney.

Check out the Southbank by Beulah media centre for some videos with each of the architects.