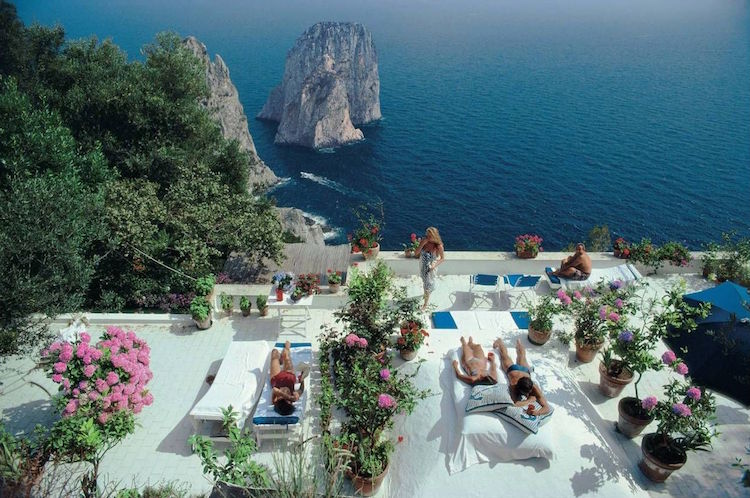 If you are wondering what this picture above has to do with the SEA or social media; I have no idea but it’s a beautiful image, I suspect it’s by Slim Aarons on Capri and it’s somewhere I’d rather be than chilly Melbourne right now.

In a minor attempt to escape the cold I ventured north and happened to be in town for the latest instalment from the Sydney East Architects (SEA) network / lecture series, this one was hosted by the very civil Kieran McInerney with architect / social media boss Jenna Rowe and media magnate / digital artist Marcus Piper (Mezzanine magazine).  The subject was social media and more specifically Instagram, I was keen to go along to this as I had recently switched off all my social media accounts as a little experiment.  I was interested to see how others used these types of accounts and the biggest takeaways were authenticity and engagement.  The former was reasonable but the later did not resonate with me.

At the moment I’m feeling that social media is one of the biggest time wasters that we face.  Sure tonnes of the content is great but megatons aren’t. I also don’t agree with their algorithms as they do not reflect a reality but rather a contrived version that suits Instagram (Facebook) rather than us as users.  The algorithm is used to make it highly addictive and it also places us all in little echo chambers, which are never healthy. When I read a paper, magazine or a blog I do so at my pace and I usually know the extent of the full document, I know there is an ending and where exactly that may be.  It’s like reading a paper book versus an yucky ebook, you gauge the thickness of the pages read and the pages unread and you can get a handle of where you are in the story.  Blogs are another good example in that I know I am getting the latest info and the whole order of the thing hasn’t been switched up on me.  This concept is not new, think back to the first time you saw Tarentino’s Pulp Fiction, we were all bamboozled by the order of the movie but there was an end and we put it back together in our own minds and it all made sense. Imagine for a moment if that movie was still going, never ending and in my opinion this is social media today.

I just read a quote from a fantastic new site called ‘Inside the Heliosphere’ by Captain Chris where he talks about this idea:  “The barking of social media / celebrity Cerberus can dilute these opportunities, although perhaps it’s an ancient human malady feeding these modern obsessions.  The dread of the flicker of existence.”  Pretty heavy stuff and the opportunities he mentions are stories and narration of people and their thoughts and memories.

Who knows, I may be wrong and I am sure I will resurrect my social media accounts at some stage, but for now I just want to draw.