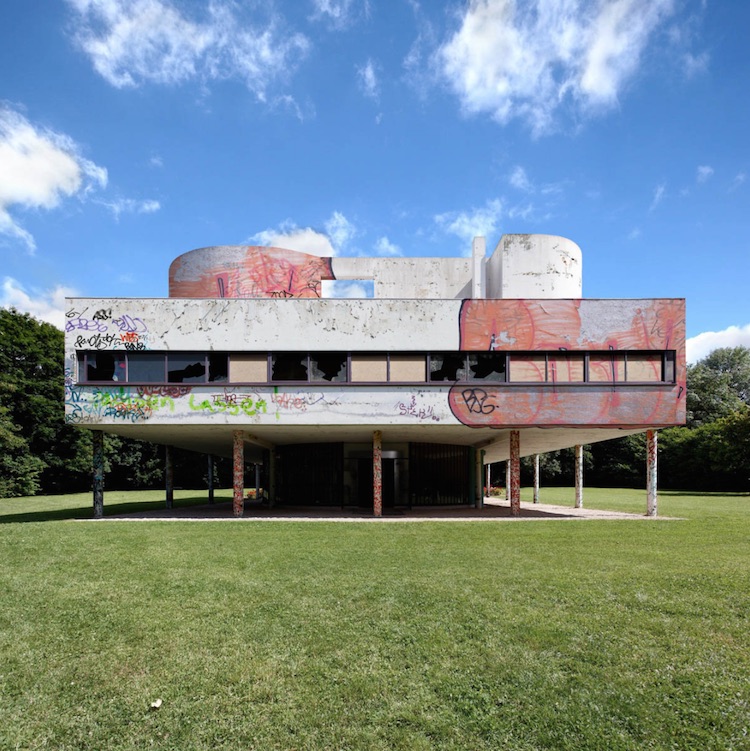 I’ve posted a couple of projects by Corb and I’ll probably do a few more in the future because he was such a force. Consider the fact that 17 of his projects have been added to the UNESCO’s World Heritage list. Some other fun facts about Corb, upon his death he left behind:

The villa, completed in 1931, is located outside Paris in Poissy and is probably the best International Style Modernist building in existence. The building is characterised by it’s minimalism and lack of ornamentation that was common for that time. Most houses built to this day do not even come close to matching many elements of this structure and none are as inventive considering the time. The villa fell into disrepair after the second world war and the French state restored it to become a museum piece and opened it to the public.

It’s interesting how many artists have chosen these projects as the basis for their work, they come up time and time again including Callum Morton and Casa Malaparte and also his work on Farnsworth House. Philip Johnson’s Glass House and Fujiko Kakaya Veil posted here or more recently Yayoi Kusama and her red dots. These buildings are pervasive and it seems that artists are not immune. The image above is from a series of photoshoped artworks by artist Xavier Delory where he superimposed graffiti and degredation which is not that far off the reality of an older image showing the neglected villa.  If you are after some more information on Corb, one of my favourite books on him is ‘Le Corbusier: Moments in the Life of a Great Architect’ by Magnum photographer Rene Burri. If you get a hold of a copy you’ll see the last page shows the headstone of both Corb and his wife, a little morbid but it really is stunning.