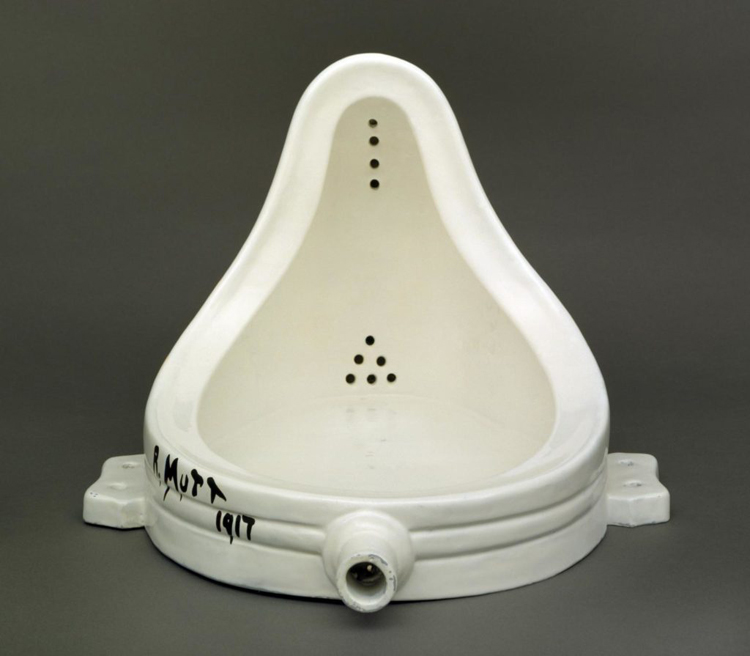 Marcel Duchamp (1887-1968) and one of his early ‘readymade’ artworks called Fountain (1917). Duchamp famously quipped “the alternative to this concept is ‘reverse readymade’ where an existing work of art would be used as an ordinary object “A Rembrandt used as an ironing board”, imagine. Some contemporary artists of our time that reference this readymade notion include Ai WeiWei and the Ming Vase photo collection where he drops a priceless vase (not so ordinary) and captures the moment of destruction. Andy Warhol and his Tomato Soup Cans (1962) or the Brillo Boxes (1964). Australian artist Sean Gladwell recreated Duchamp’s famous Bicycle Wheel (1913) and used it in his own performance piece. They call it Reverse Ready Made but really when you think about he is using the wheel like an ordinary object which happens to be a famous art work that is a readymade ordinary object so figure that one out for me.

Getting back to Fountain above, this was first exhibited in 1917 which happens to be 100 years ago, hard to comprehend. Originally rejected by the Society of Independent Artists in New York City the work was then exhibited elsewhere to much fan-fare, the original was subsequently lost however 8 replicas were created with some association to Duchamp. In 1999 edition number 5 reached a record price of $1.7M at Sotheby’s, the remaining five are in gallery collections, one in private hands and the whereabout of the remaining piece is unknown. Apparently there are some arty types out there who try and piss in these whenever they are put on show, pretty gross and not the sort of performance art that I’m keen on seeing.