Sorry for nerding out here but I think this stuff is important to architects and their practices; I can’t wait for the technology of holograms to catch up to the movies with holograms. Check out these fantastic images from the Star Wars franchise (as a side issue, when did we start calling a movie series a franchise? I am fully aware they are now just cash machines but do we really have to call them a franchise rather than a piece of entertainment… I digress). The original Star Wars hologram scene with R2-D2 & Luke was captivating, even more so when you consider it was 1977. The more recent version pictured above with BB-8 is quite spectacular. I suspect these scenes are easily created as a post production digital effect for the big screen and some of the technology already exists with augmented reality however a fully fledged hologram is yet to appear in reality, I apologise for the terrible pun there but I couldn’t think of any other way to put it. The Star Wars franchise has holograms littered throughout the film with small droid projections, in car / spaceship dash projections, big central meeting tables as pictured below and even little hand-held devices, they’re treated like the norm.

There are also countless other sci-fi movies that use excellent holograms including, Star Trek, the Alien series (refer previous post here) and Ocean’s 12 with probably the most realistic hologram when they do the Faberge Egg heist.  I have also watched a film where architect Bjark Ingels (BIG) presents his Figure 8 Apartment building with a semi augmented reality vibe, it’s worth a search but the idea of full-on realistic holograms seem to be a long way off. The best real world applications so far have been a few re-creations of performers like Elvis, Michael Jackson & Tupac for posthumous stage shows however I believe all of these are not true holograms but rather they are more optical illusion such as the ‘Pepper’s Ghost’ where you have a sheet of glass with an angled projection.  ABBA are apparently touring Australia in 2019 via hologram, yeah not the same thing.  I am talking about the idea of a few people sitting around a hologram desk in direct view of a 3D image or moving object, better still a object that can be manipulated by the user.  Like a replacement for the physical architectural model or a progression from the on-screen view of the 3D computer model. Fingers crossed this will happen in the near future.  A recent article on Archdaily popped up and this is the closest that I’ve seen, Euclideon Holographics are a group that are probably the closest yet however they are about $47K, probably because it’s leading edge.  Note the glasses and they also use a little hand held controller that looks like a squeegee.  Check the classic Star Wars shirt, they know their roots.

“Help us Obi Wan, you’re our only hope”. 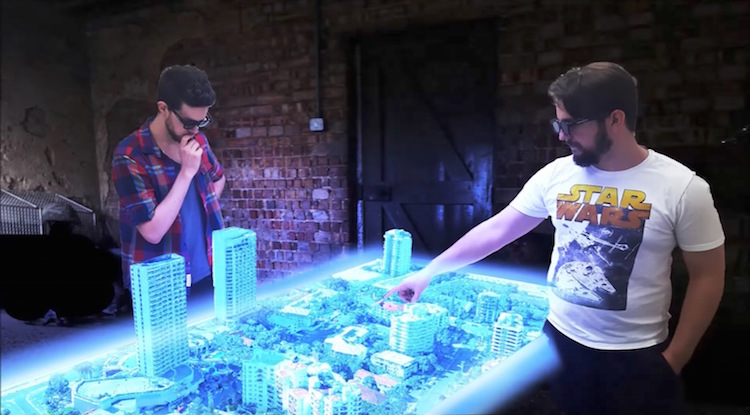